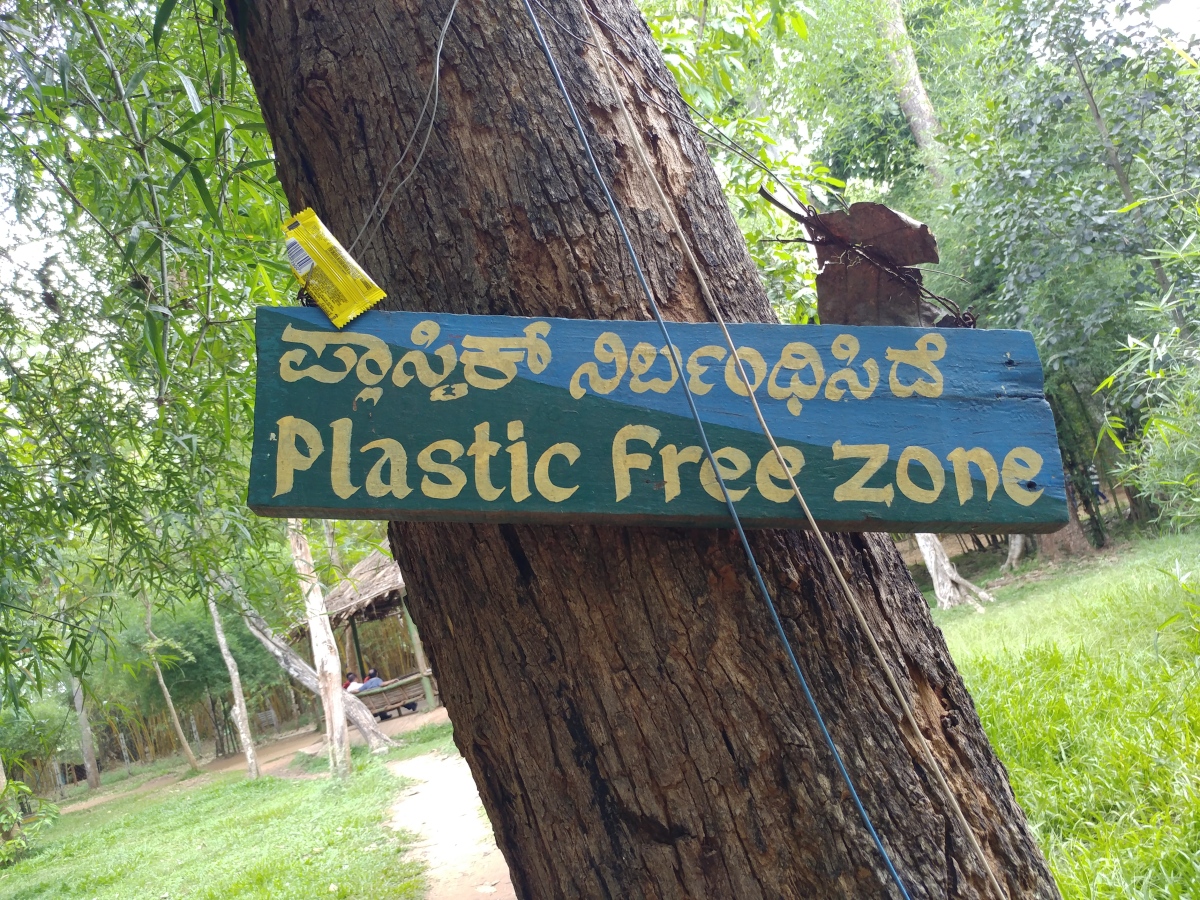 Here’s a bandwagon I’m more than happy to jump on to- #BeatPlasticPollution.

It’s amazing how many people are interested in cutting down their use of single-use plastic. Or is that just what the algorithms are feeding me?

I’m personally very concerned about being as low-waste as possible, especially when I travel.

Why particularly when I travel, you ask. What about when you are wherever you live (home or expat-land)?

Needless to say, I’m careful at (nearly) all times. I do my best to make conscious choices. When you’re home, you know what your options are for disposal, recycling, take-back schemes. Plus you have access to your own arsenal of reusables. But when you travel, it’s easier to slip up, as I did in SG (sorry, SG!)

I recently visited Kodagu aka Coorg, Karnataka, India for the first time. I was impressed by the fact that we were given only one plastic carry bag in our week there. Even food deliveries come in cloth bags.

My best friends either used the metal straws I carried for them or drank straight from the glass (you know, like regular folk). People looked at me funny every time I said “No straw, please”, but not when we held out our cloth bags to put stuff in. Education?

Did we get through the whole trip without discarding anything inorganic? Nope. We just made better choices than we would have before:

My waste-related goals for my next trip:

But what do I do about the waste created in-flight?

Another challenge to surmount…

Happy birthday to W, who hates when food mixes on his plate, and advance wishes to AMD, who can cook anything.

Why Indians are good people to work with

Sure, you’ve worked with a couple of Indians, and you’ve found that we are loud, eat weird, spicy food, and sound at least 10% like Apu. We’re nosy, don’t understand the difference between personal and public-consumption info, and the clothes we wear are bright.

And that’s precisely why we’re awesome to work with!

We’re awesome because we try to understand the people around us and their motivations. That’s where the ‘Are you married? Do you have children? What religion are you?’ questions  come from. We’re collecting data about you, because we might use it at some point: Oh, this person is fasting – haan, let’s not have the team dinner today. Or, Which person from my team should go on holiday this summer? Maybe X, s/he has children in school, so summer they’ll be off, na?

We’re awesome because we respect – for the most part- that people follow different religions, and it isn’t our place to change that. Do we know a lot about each other’s religions? Probably not. We’re game to learn. Ask us questions about the faith we practice, and our answers are fairly open and honest.

We’re awesome because we believe in Unity in Diversity. It’s quintessentially Indian. Yes, there are those who are more insular than others. They are the exception, not the norm, especially among urban, educated Indians- the kind that you probably work with. Our country’s history is full of proof that we need each other to be able to make it through the seasons and years. We’ve learned that lesson in varying degrees.

We’re awesome because most of us are at least bi- if not tri-lingual. And just so we’re clear- these aren’t always obscure languages, spoken by the last remnants of a tribe. Most of the languages we speak are spoken by populations equal to those of Europe’s smaller countries, like Denmark.

We’re awesome because we’re hardworking. But we can also be lazy. Put those together, and you get people who will go the distance, but still look for the quickest way.

And last, but not the least, we contribute greatly to the economies of the countries we live in, whether they are our own (a given) or someone else’s.

I’ve just finished reading An Era of Darkness: the British Empire in India by author, politician, diplomat/ Indian candidate for the post of UN General Secretary a couple terms ago, Shashi Tharoor.

It’s his take on why the British owe the subcontinent.

He definitely makes a number of valid points.

Did the British do a lot for India? No. Neither did the Portuguese, or the French. (At least the French considered the people in their colonies ‘citizens’. The Portuguese did too, for a split second, a little bit before Salazar grabbed power.)

Do the imperialist nations (including but not limited to the Dutch, the Belgians, the Spanish, and the Japanese to some extent) owe the rest of the world? Yes.

And you know the easiest way to begin making up for it? Don’t charge us for clean technology. Give it to us for free.

Why? You ruined indigenous industry so your own would flourish, and decimated and degraded indigenous populations for centuries because they didn’t fit in the neat little box of your insular culture(s). You can at least help us protect the planet while raising our people out of poverty. Let’s face it, they are probably in it because you moved populations around to suit your needs, and messed up our economies. (Fun fact: India’s economy was equal to roughly a quarter of the global economy in the early 18th century, but is at maybe 9% today, nearly 70 years after Independence.)

No, the people who live in and legislate for the ex-imperialist countries are not the same ones who came and took over something that wasn’t theirs. But you’ve benefitted from your ancestors’ rapacity.

Let’s make the world a better place now, because we can’t undo the past.

Let’s have some form of reparations.

So you’ve decided to get married.

How lovely. Congratulations to both of you and your family.

How many people are on your guest list? 300? This is not Sparta, my dear. This is a wedding. You need to invite at least 500 of your closest family and friends to make it a proper occasion.

But you also need to preserve the Earth for the babies that will inevitably come into being following your grand union celebration.

A few simple things you can do:

1. Don’t use thermocol-anythings. That means no confetti. No centrepiece. No non-biodegradable decoration. (Try something repurposed, like a cardboard form, perhaps?)

2. Reusable cutlery and crockery is best. If you can’t find a caterer who has the required numbers of hard stuff, use leaf plates. Banana or pressed leaves? That’s up to you.

3. Can your guests use public transport to travel to and from the venue (of the religious ceremony and or the partay)? Can you organise a bus or bullock cart to ferry them around?

4. Firecrackers are pretty and help draw attention to the goings-on, but they also cause air pollution and noise pollution. Say no to gonnalls

5. E-vites are not tacky, no matter what some old-fashioned folk think. A facebook invite is fine if it isn’t a tres formal do. Even if it is- it’s your wedding, do what you want!

6. Let people know what you want, or re-gift items that you aren’t interested in. Make sure you send out thank you emails before the re-gifting.

8. For heavens’ sake, don’t do takeaways. They don’t serve an earthly purpose except, perhaps, the collection and generation of dust.

9. Choose an appropriate time of the day and year to get married. If you hate the heat, the summer months are out of the question. If you can’t bear the cold, don’t go to the north of the country, or the Ghats (and other hill ranges) during winter.

Day 70: Write a mystery in which the words ‘silver’, ‘pen’ and ‘green’ all play a prominent role